#Ravello #VEEAM and the chaos monkeys

Starting off a quick spin through Ravello. Ok, I got all registered up… now what

hmm I bet there is some way to import a VM image… although really an virtualized ESXi server would be more interesting.

Ok, seems pretty straight forward, just drop an empty ESXi container and then attach a CD-ROM and install…. although wouldn’t it be nice if Ravello already had the iso there already to go for me…. hmmm could be a security issue though. Although I’m already trusting them with all the keys of the castle so… why do I have to drop an empty ESXi, how about I drop an already made ESXi 5.5 box… Oh well, I’ll stop my complaining 🙂

Pretty easy, go to the library and the upload an .ISO (I would have liked a drag and drop of the file into the window to upload, but it was easy enough to use.)

So, now I choose that disk image and attach it to the empty ESX box. 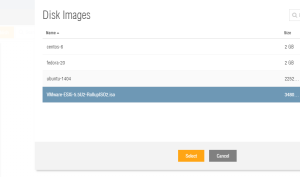 This window could be improved, it’s hard to tell what you are able to click on. Radio buttons would be appropriate.

P.S. its hard to delete a box from the canvas. I expected to be able to right click it and then option delete. Instead, its hidden under the more button, bah.

Ok, published. Looks like I should press the play button 🙂 err, go to the console 🙂

Ok, firing up the console… that is just plain cool!!!

Ok, so now I need to do some tweaks to allow the ESXi box to be added to the same cluster. So it has you make some changes to enable SSH on the ravello side and then turn on the SSH on the ESXi box…. and then tells you to make changes. It fails to mention you should SSH into the box now 🙂 but anyways after futzing I was able to ssh in, and make the changes.

OK, so now I have two ESX severs up and running. Now for some fun.